The Concept of Qi in Chinese Medicine 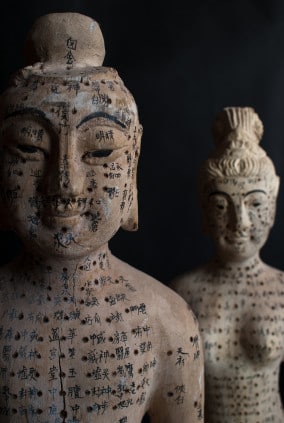 The Daoist philosophical approach is a close relationship between humankind and nature. Concepts of qi can be noted by Daoist writers such as Lao Zi, Zhuang Zi and Lao-Zhuang. Qi was used to explain the workings of the entire universe. As a microcosm of the universe, the concept of qi made its way into medical writings.

Qi became known as the vital substance of living beings. Medical theorists postulated that just as qi was seen to drive wind through the sky, collect in mountains and course from the river to the sea, qi must certainly follow these same principles within the body. This becomes the basis of anatomy and physiology in Chinese medicine. It is known to practitioners of acupuncture Chinese medicine as the jing luo  经络.

When qi was adopted as a construct of physiology in Chinese medical theory, differentiating the many processes of qi in the body then followed. Very sophisticated and complex mechanisms to explain the processes of human life took shape. By the time the seminal text, “The Yellow Emperor’s Classic of Internal Medicine” was compiled (450-200 B.C.), close to 300 different categories of qi were expanded and developed to describe everything from the skin’s pores opening and closing to proper digestion and elimination.

The two most basic categories of qi are yin qi and yang qi. The yin qi is the nourishment that comes from the assimilation of food and drink via the digestion. The yang qi in its most yang form is known as Wei qi. This “defensive qi” circulates outside the jing luo as serves as a defensive mechanism against external pathogens that try to enter the body. This is very similar to the Western concept of having a strong immune system.

In addition to the basic broad categories of qi, all the internal organs have their own distinctive qi. Each organ’s unique qi is seen to control specific physiological, sensory and emotional processes

As you can see, qi is scalable and defines both health and pathological developments in the body. The practitioner of acupuncture and Chinese medicine uses questioning, palpation, observation and other sensory input to access a patient’s concerns. These concerns are then translated into proper and improper qi mechanisms within the body. The skilled practitioner then works to resolve the named imbalance, insufficiency or excess situation through the use of qigong, dietary therapy, massage, herbs or acupuncture.

This understanding and harnessing of qi – the vital substance of all living things – is the core element and foundation of Traditional Chinese Medicine and the basis for how I work with all of my patients. To learn more about qi, you can visit: