How Pinellia (Ban Xia) is Used in Chinese Herbal Medicine 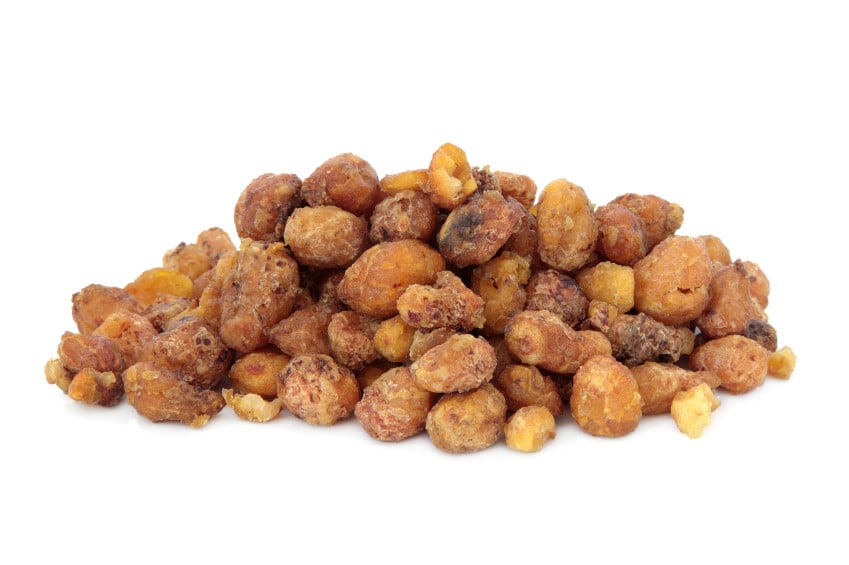 Pinellia is a Chinese herb from the Araceae family of flowering plants. It is native to Japan and southern China, and is often called the “green dragon” because of the color and shape of its flower. Pinellia’s long, tongue-like spadix is similar in appearance to the waxy peace lily, an ornamental plant commonly displayed in American homes. Practitioners of Chinese medicine use Pinellia’s tuberous, moon-like roots in a variety of remedies. To eliminate the toxicity of the raw herb, the root must be boiled, salted, soaked, and steamed, and then fried with ginger, alum solution, licorice, or lime. After processing, the root is referred to as Ban Xia.

Ban Xia is one of the most important herbs in Chinese medicine for drying dampness and transforming cold phlegm. While commonly incorporated into formulas to help expel phlegm from the lungs, Ban Xia really takes center stage in transforming cold phlegm conditions in the spleen and digestive tract. Thin, cold phlegm in the digestive tract is often the result of chronic insufficiency or hypo-functioning. In our culture, this is commonly attributed to dietary intemperance and overeating – we’re pretty good at that!

The spicy and warm nature of the root has an affinity for the lung, spleen, and stomach channels. In addition to drying dampness, Ban Xia’s actions in the body help to descend rebellious qi, which can cause stomach upset and vomiting. Because it so effectively promotes directionality in the digestive system, Ban Xia is pivotal in reducing distension and stuffiness in the chest or abdomen. It can reduce brain fog caused by Lyme Disease, ease fluid retention, and dispel the feeling of a lump in the throat associated with emotional distress. It can also be applied topically to heal sores and ulcerations of the skin. For this purpose, it is dried, powdered, and then mixed with egg white.

Many Westerners are surprised to learn that expelling cold dampness from the body can drastically improve one’s mood. Clinical research is starting to demonstrate this connection now, too. One study published in the Journal of Ethnopharmacology showed that a common Pinellia-containing formula – Ban Xia Hou Po Tang – had antidepressant effects on par with Prozac. A more recent, placebo-controlled clinical trial supported these results, and showed that Pinellia was exceptionally effective at reducing anxiety as well as depression. It also appeared to promote feelings of general wellbeing.

One systematic review of studies examining Ban Xia Bai Zhu Tian Ma Tang, a Pinellia-based remedy, found that it has promise for treating high blood pressure (hypertension). This is likely because of its diuretic properties, which can help reduce strain on the cardiovascular system through the release of excess fluid. Pinellia has also been proven to combat a range of common respiratory illnesses, from flu to pneumonia.

You are most likely to encounter Ban Xia in a traditional Chinese formula administered for digestive distress, low mood, or an excess of mucus. Unfortunately, these symptoms often show up together in one miserable package! One of the best ways to resolve problems related to cold phlegm is to speak to an experienced practitioner of Chinese medicine. He or she may recommend a formula containing Ban Xia, and suggest lifestyle changes to help it dry persistent dampness more effectively. For most, when used appropriately, Pinellia has virtually no side effects; this has been shown in both traditional Chinese and Western medical research.