The Four Masters of Chinese Medicine: Architects of Change 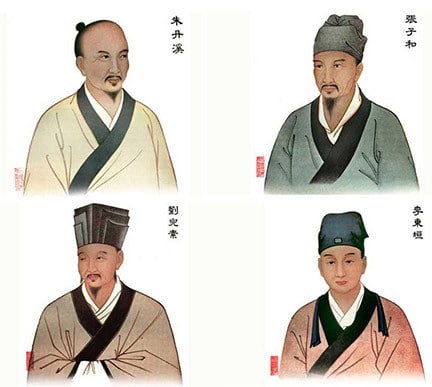 In the mad world of newer-better-faster-stronger, it’s important to take a minute and remember that all of the advances that we have—from iPhones and micro-computers to laser treatments and super drugs—evolved from earlier innovation. The foundations of modern medicine are no exception.  Often the basics that new techniques are built upon trace back to systems laid out centuries ago and are still formidable in shaping new ideas and thoughts on disease treatment and prevention. Chinese medicine is arguably the oldest, continually practiced form of medicine in the world. There definitely is a reason these strategies have survived the test of time.

It’s become a pretty common practice to spend time on the internet diagnosing ourselves and thinking about treatment options. As more practitioners and patients move towards collaborative medicine and incorporate Traditional Chinese Medicine (TCM) into Western treatment plans, it’s not a bad idea to have a better understanding about the theories developed, the physiology around why it works, and the historical context that shaped the paradigm shift. Exploring the important contributions made by masters of Chinese medicine helps provide a better understanding of how medicine has evolved to where it is today. Never a bad thing to know where and why things started.

So, what and who shaped Traditional Chinese Medicine? Much and rightful attention is paid to the Han Dynasty (220 B.C. to 220 A.D.). The masters of Chinese medicine of this era included Hua T’o and Zhang Zhong Jing. This is when the most famous texts of Chinese medicine were published; these seminal texts include the Shang Han Lun (Treatise on Cold Damage Disorders) and the Jin Gui Yao Lue (Essential Prescription from the Golden Cabinet). Chinese medical knowledge during the Han dynasty is expansive. Hua T’o is credited for self cultivation practices known as daoyin exercises as well as surgical and anesthesia protocols. Zhang Zhong Jing is recognized for the development of the Six Stages Theory. This theory is a model for the diagnosis and treatment of disease based on the progression of pathogens once they enter the body. This becomes a foundation for the practice of herbal internal medicine.

The historical time known as the Jin-Yuan period will be the focus of our of next four blog articles. The Jin-Yuan period covers the 13th and 14th centuries and is a catalyst for the development of great innovation in Chinese medicine.

From the Jin-Yuan era came the development of four distinct schools of thought, created by men who came to be known as the Four Great Masters of Chinese Medicine – Li Wan Su, Zhang Zi He, Li Dong Yuan, and Zhu Dan Xi. Their mastery of Chinese medicine coupled with their personal circumstances during the times they lived helped shape four distinct philosophies in the causation, prevention and elimination of disease. Their critiques of the classical canons and doctrine create new developments and ways of thinking thus expanding the medicine for more modern times and conditions. Their novel new approaches helped usher in a renaissance in Chinese medicine.